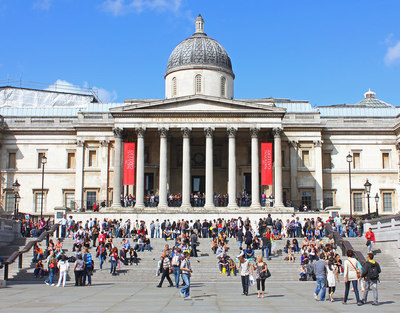 The National Gallery is home to a collection of more than 2,300 paintings from the 13th to the early 20th century. In comparison to other famous European art galleries, the collection of the National Gallery is relatively modest, however, it contains some of the greatest masterpieces by some of the greatest artists of all time. As a result, it is among the top 10 most visited museum collections in the world and the third most visited museum in the UK.

The National Gallery was established in 1824, while its art collection started with 36 paintings that were purchased by the British Government. Over the following decades, the Gallery’s collection increased to over 2,300 paintings from the following time periods:

The greatest treasures of the National Gallery collection include:

“The Arnolfini Portrait” by Jan van Eyck, “The Virgin of the Rocks” by Leonardo da Vinci, “Bacchus and Ariadne” by Titian, “Self Portrait at the Age of 34” by Rembrandt, “Venus and Mars” by Sandro Botticelli, “The Madonna of the Pinks” by Raphael, “Doge Leonardo Loredan” by Giovanni Bellini, “The Toilet of Venus” by Diego Velazquez, “The Battle of San Romano” by Paolo Uccello, “Sunflowers” by Vincent van Gogh, “The Ambassadors” by Hans Holbein the Younger, “Samson and Delilah” by Peter Paul Rubens, “Bathers” by Paul Cezanne and “Whistlejacket” by George Stubbs, to mention only a few. 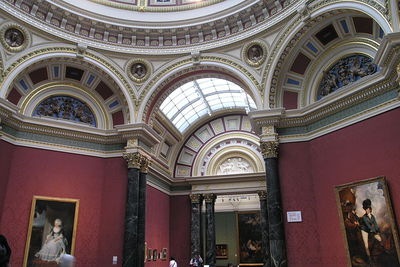 The collection of the National Gallery continues to grow. In 2013, the Gallery’s collection of masterpieces was enlarged for an additional 26 paintings: